BURLINGTON, Vt. (WCAX) – January is Human Trafficking Awareness Month and Vermont is not immune to the crime.

The Department of Justice defines human trafficking as “the act of compelling a person by force, fraud, or coercion to provide labor or a commercial sex act.” The DOJ says coercion can be subtle and traffickers use manipulation and threats of physical, psychological or emotional harm. The Vermont Human Trafficking Task Force says the crime is happening every day in Vermont, despite most people not knowing.

WCAX News sat down with a local woman who was sexually exploited for years in Burlington and Colchester. Ashley Messier says she became addicted to heroin and cocaine in her early twenties. She says she abused drugs as a way to cope with pain from her abusive marriage, a violent upbringing, and her father’s suicide.

“The desperation for pain relief was so big in my life that it was just an instant moment where I became an addict and never stopped,” Messier said.

As her withdrawals intensified, Messier met a drug dealer at the top of Church Street in Burlington. She says they started off as friends but he quickly became more aggressive and manipulative. Eventually, to get her fix, she says she was forced to have sex with him and several other men for years.

“[He said] ‘And if you don’t, not only will I make sure you don’t have what you need, but I will make your life very difficult,’” Messier told WCAX.

Messier says she felt she didn’t have a choice but to participate since she had no family or friends to rely on. 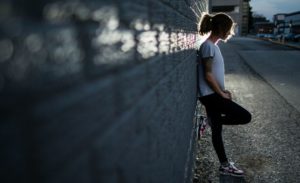 “You become, sort of, conditioned to accept that, in order to survive, this is your mode of survival,” she said. “This is how you’re going to meet your needs. It was either do this or suffer in these other ways so you’re literally making a decision between what type of suffering you’re willing to endure.”

Edith Klimoski is the director of Give Way to Freedom, an Essex Junction-based group that supports and provides victim care services to the survivors of human trafficking. She says traffickers specifically look for vulnerable and isolated people.

“The perpetrator can see vulnerabilities and when they do, they will prey upon that person and victimize them in order to make money,” Klimoski said.

According to the DOJ, some of the demographics traffickers target most for exploitation are children, runaways, people who are mentally or physically disabled, people living in poverty and those struggling with substance abuse disorder. Victims are lured, manipulated and controlled by the trafficker on false promises of relationships, employment or drug availability.

Messier says she was trafficked until 2015 when she was arrested on fraud charges after her traffickers forced her to cash thousands of dollars worth of fake checks. She says she’s sharing her story to create space for other survivors to tell theirs, in hopes that one day, there are no human trafficking stories to share. But she says things that make people more susceptible to trafficking– like poverty, homelessness, and mental health — must first be addressed.

“Starting to really look at the root causes. Starting to address trauma in real and authentic ways. Starting to understand the impact of not being able to meet basic needs. How do we start addressing that? How do we provide adequate health care and mental health care?” she said. “The only way we’re going to be able to create change is to have honest conversations.”

If you are being trafficked and need help, you can call Vermont 211. If you are a concerned citizen and suspect trafficking is going on near you, you can call 1-888-98-HUMAN to talk to law enforcement. If you want to report something but also want to remain anonymous, you can text the Crime Stoppers line.

The Vermont Human Trafficking Task Force was formed in 2013 and is led by the United States Attorney’s Office for the District of Vermont and the Vermont Attorney General’s Office. It seeks to create a collaboration between stakeholders to pursue prosecution of perpetrators and to protect, rehabilitate and empower survivors of human trafficking through comprehensive social, medical and legal services.

To view this article in its original format click here