A stalking experience, escaping to Vermont

A Stalking Experience, Escaping to Vermont 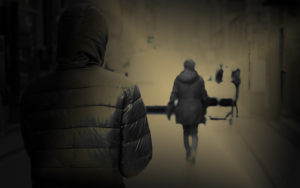 Everyday, we walk past strangers while going through our normal routines. Are we the only ones who pay attention to our daily whereabouts? For most people, yes, but the odds that someone is watching you could be higher than you might have thought. According to the Stalking Prevention Awareness Resource Center, in the U.S., one in six women and one in 17 men have experienced stalking in their lifetime. This statistic is not meant to scare you, it is only to show you that stalking is more of a problem than you might think. Anna Nasset, a Valley resident, agrees with that.

In 2011, Anna Nasset was living in Port Townsend, Washington. She owned an art gallery and was living a normal life. One day a man came into her gallery, asking if she would display his art. “I didn’t really think anything of it, I just dismissed his submission of art, it wasn’t what I wanted to show”, she said in a recent interview. Unbeknownst to her, this man, she calls him Jefferey, had been stalking her since 2008.

After their encounter at Nasset’ s gallery, Jefferey started sending her vile messages online. He said things that made Nasset think he was following her around daily. Nasset knew that she needed to listen to her gut and get help. “Luckily, unlike most law enforcement who will send you out the door and say you’re overacting, there’s nothing wrong, the police department really listened to me,” said Nasset. The police knew of the offender from previous small crimes in the community, so they set up a plan to ensure Nasset’s safety. Their hope was that Jefferey would lose interest and move on, that was not the case.

In 2012, Nasset and the local law enforcement built a legal case against Jefferey, putting him in jail for less than a year. After he was released, the stalking continued. “He really walked a fine line of knowing how to continue to stalk me but fall within his legal rights,” said Nasset. After many years of battling the mental toll of stalking, Nasset closed her gallery.

However, even after she closed her business, he continued to stalk her. Traumatized, she moved to Vermont in 2016 and started working in the restaurant industry.When Nasset got to Vermont, Jefferey continued stalking her online. It can be hard to prosecute a stalking case because a lot of the harm caused can be mental. Luckily, a prosecutor did take her case. “I think the prosecutor really was able to see that this is a very long, long crime, and there was no end in sight, despite attempts at rehabilitation, despite mental health counseling, this man is dead set on continuing to behave this way” said Nasset. Usually, stalking cases are hard to prosecute, but with Nasset offering eight hours of testimony, it being a bench trial (no jury), the defendant defending himself – finally her stalker was given the maximum 10-year sentence.

That sentence didn’t put Nasset completely at ease. “Is this really over, or in 10 years am I changing my name and moving to Europe?” said Nasset. “I’m hoping for the best for myself and others, but I don’t know. That I think is one of the worst things about this crime is that there is such an unknown variable.” Nasset still fears that freedom from her stalker will only last 10 years. However, this thought doesn’t seem to stop her from living her life.

She is now a public speaker and is currently working on a book she hopes to publish about her stalking experience. She travels the country talking with law enforcement, first responders and colleges about stalking and it’s detrimental effects on the lives of innocent people.

Part of Nasset’s work now revolves around getting rid of the unnecessary use of the word “stalking.” Oftentimes, it is used in daily living i.e. “Oh I just stalked them on Instagram.” According to Nasset, this use of the word can take away the severity of the actual crime of stalking. “There’s still so much that’s unknown about this crime and there’s so little attention given to it. It’s the start of so many other crimes, and they focus on those larger crimes instead of being able to look at what if we took stalking seriously? Would this person not have been murdered? Would this person not have been raped? So that’s a big part of the messaging that I want to get out there,” said Nasset.