Attorney General TJ Donovan is asking lawmakers to restrict a policy that allows certain prisoners to earn reduced time off their sentences. Donovan doesn’t want it to apply to people convicted of murder or sexual assault.

The policy was passed earlier this year as part of a criminal justice reform package called Justice Reinvestment II, aimed at keeping people out of prison, reducing recidivism and limiting the state’s furlough system.

Under the so-called “good time” policy, starting in 2021, inmates can begin to earn seven days per month off their minimum and maximum sentences by obeying rules and meeting Department of Corrections requirements.

But on Wednesday, Donovan told legislators on the Joint Legislative Justice Oversight Committee that in the interest of crime victims, the law should be changed so that people convicted of murder or sexual assault can’t earn time off. 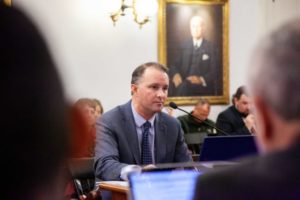 “I think, and I’ll take responsibility for this, that I didn’t perhaps think as deeply about this part of the bill as I should have, because it comes back to victims,” Donovan said.

He said he’s been thinking about crimes he prosecuted as the Chittenden County state’s attorney, such as the case of Laura Winterbottom, who was raped and killed in Burlington in 2005. In that case, he reached a plea agreement with Winterbottom’s murderer, Gregory Montgomery, who was sentenced to 43 years to life in prison.

“I recall those negotiations, and we made promises. And the court imposed that sentence. And I think out of fairness, and I think out of process to the victims, I’d ask the committee to reconsider the ‘good time’ portion of this bill,” Donovan said.

Chris Fenno, executive director of the Center for Crime Victim Services, said she originally supported the good time proposal that would apply to all current inmates. However, like Donovan, upon further review, she believes the policy should be changed.

“In retrospect, I did not fully see the unintended consequences this had for victims and their families, especially in cases of extremely violent crimes,” Fenno said. “Talking with victims and families has shown me that changes in this legislation need to be made.”

Fenno said a study committee should be formed to look at whether certain crimes — including the state’s “Big 12” offenses, which include murder, kidnapping and sexual assault — should be excluded from good time eligibility.

“I don’t think you need to roll back what you spent years putting together that arose out of the Department of Corrections and impacts an extraordinarily small number of cases in only a subset of those cases,” Valerio said.

Valerio pointed out that, even if someone convicted of murder or sexual assault reached their minimum sentence with earned time, they couldn’t be let out of prison automatically. Their release is up to a parole board.

“It’s not like the person is just let out on their own after they have done a good job in prison and without any review by anybody,” Valerio said.

“As I said, we were trying to solve one problem and may have created another,” Sears said.

Sears, who also chairs the Senate Judiciary Committee, said lawmakers will review the good time law next year, and wants a specific proposal from Donovan on how to change it.

He said the legislation had received full support from crime victim advocates, but he understands why some are now concerned.

“If you’ve been a victim or your relative has been a victim of an extremely violent crime and you thought for whatever reason that they were going to get out at a certain date — that might change as a result of this — I understand that,” Sears said.