The keynote speaker for The Vermont Crime Victims Rights Week Service Awards Celebration was  Anna Nasse, who moved to Vermont from Washington state three years ago to find peace. 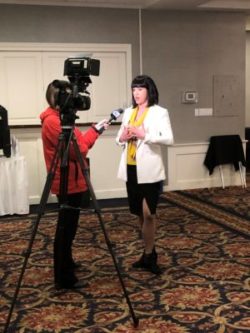 “I’ve been the victim of stalking for 8 years by a man I do not know,” she said.

Her case is ongoing in Washington and, in some ways, she doesn’t see an end in sight.

“That’s the hard part is that there is no end to the story,” she explained. “I can’t tidy it up in a neat package. this is ongoing and may go on for me for the rest of my life.”

Nasset turned immense difficulty into something positive. She started Stand Up Resources to help people who work with victims.

She travels the country, and soon the world, sharing her story.

“To be able to say I was a victim of crime was a surreal moment of acceptance for me,” she said to the crowd at the Capital Plaza Hotel in Montpelier. “And not in a sad way. It was a way for me to take a huge part of my life that was hidden in darkness and give it a voice.”

She was surrounded by Vermonters who work to help victims through their darkest days. 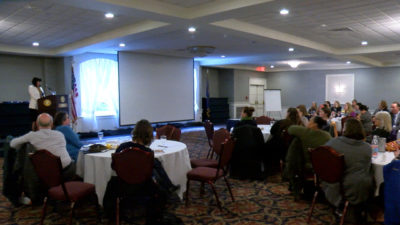 “‘I hear you’ means so much to a victim,” said Colville.

“The amount of work that we do brings a lot of trauma also to our own beings and to kind of bond together to have that kind of backup support for one another, to say ‘I need your support because i’m struggling with this’,” said Colville.

The Emerging Leaders award went to a group of Montpelier High School students who are spreading the word about rape culture at their school.

The group, called The Conversation, started when five students wrote about surviving sexual assault for an assignment.

“Our goal isn’t to change people’s minds overnight but to just start this dialogue and hope that everyone who comes and everyone who is involved it is a better and more conscious person,” said Lily Fournier, a senior at Montpelier High School.

The lessons to victims’ services providers was to listen and show empathy.

“Believability of victims when they come in to make a report of any kind of crime, to have that believability be first and foremost. And then along with that the empathy piece. I’ve always worked with really empathetic service providers,” said Nasset.

To read the story online.