MONTPELIER — Advocates for victims of crimes were honored at the Vermont Crime Victim Rights Week ceremony in the Capital City on Monday.

Held at the Capitol Plaza Hotel and Conference Center, the annual awards ceremony, founded by the Center for Crime Victim Services in 1991, celebrates both professional and volunteer advocates for crime victims. The awards recognize individuals and organizations that help victims, promote awareness of crime’s impacts and build crime and violence prevention, community outreach and education.

Awards were presented to nine individuals and a school-based program.

Salls became a victim advocate when her pregnant daughter and her fiancé were killed in a drunken driving crash on Route 15 in Morrisville in 1986. Salls couldn’t attend the ceremony in person, but in a phone interview, said she did not expect to win the Victim Survivor Activist Award.

“I was very surprised and shocked; I just didn’t think I would even get it,” said Salls, who also speaks to offenders in Orleans, Barre and Hardwick.

Only two Montpelier High School students were present at Monday’s ceremony to accept the Emerging Leader Award, but many more have joined “The Conversation” at the school over the years. MHS community-based learning teacher Sarah Loveless, who nominated the students, said the group began in 2014 after students aired concern about “rape culture at the school, and beyond,” she said 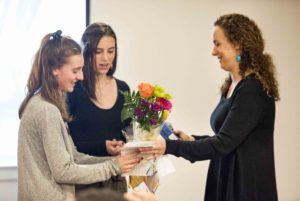 English students were asked to write a memoir, and five of them revealed they had been sexually assaulted. School officials then began a process to encourage students to address the issue, Loveless said.

“From there it’s been an important part of our culture,” she said. “It’s an ongoing student-led initiative that has brought incredible change to our school.”

The initiative resulted in ongoing conversations about objectification, party culture and consent plus presentations to younger students. Loveless said the group has many leaders, including the two students who accepted the award, 17-year-old Lily Fournier and 18-year-old Jordan Allen-Brandon.

“We try to start some of these conversations and start dialogue with our school community about sexual assault and how we can be better individuals,” Fournier said.

The group is now focused on teaching intervention strategies, such as speaking up when a classmate tells a rape joke or uses offensive language.

“That’s a hard position for anyone, but especially high-schoolers, to be put in,” Fournier said. “Our goal isn’t to change people’s minds overnight but to just start this dialogue and hope that everyone who comes and is involved in it is a better, more conscious person than they were before.”

The Career Achievement Award went to Breitmaier, director of domestic and sexual violence at the Department for Children and Families.

“She has really transformed how the state agency has worked with families that have experienced domestic and sexual violence within the context of child-protective services, welfare and safety for children,” said colleague Sharon Norton, who nominated Breitmaier.

Breitmaier thanked the Center for Crime Victim Services and noted there were few services available to victims of domestic and sexual violence when she started in the field.

“When I think about the start, it really was just the criminal justice system coming to these things, and now we’re awarding school folks and therapists,” Breitmaier said. “All of our systems need to be a part of this process to really move the work forward.

“Thank you to my wonderful team and folks at DCF services that really have been champions of this work over the years,” she added. “I’m extremely humbled.”